We have taken it with the same camera we photographed the sequence with, without removing the fisheye lens and keeping the same exposure value and other settings we had used for the rest of pictures, so that this picture is one more of the sequence, except for this is not taken from the exact nodal point of the lens and the camera is naturally held not as firmly as it was held by the tripod.

Also, the feet and body of the photographer can be seen on it, holding the camera from a side trying not to throw any shades over the ground: To get started, we'll drag the whole sequence of images that are part of a panorama to Hugin's main window to open the files.

We will not include the handheld picture of the nadir on this step because we know the positioning of the nodal point could never be identical to the one in the pictures taken with a tripod and nodal rotator and so it will need to be processed in a different way than the rest: Hugin has direct access to the information contained in the image files about the camera, lens and settings used at photographing time. However, sometimes we'll work with files which have been modified or converted to another format thus losing such information.

In the case of the example, the program does not find the information corresponding to the image located at C: In our case we don't know the Horizontal Field Of View but instead, we know we have use an 8 mm Fisheye Converter and we also know that the focal distance multiplier of the Nikon camera we have used is 1,5.

With these two latest facts, Hugin estimates the first and immediately includes it in the corresponding box: In our case, Hugin has recongnized the rest of the files by itself. The program's main window shows the data of the open files: We check that all of them bear the same dimesions: By clicking on the corresponding line we can select any image in order to look for areas to mask. On the first photo we'll choose none: With a click or with an arrow key we can move on to the next image.

With the help of the mouse we'll enclose the area to select it. With a click we go on to the next image. On it the rotator is also visible at the same corner: Then we'll select the area to exclude from the panorama just as we did with the previous image: Another click and another image with the same rotator in the corner.

The rotator that holds the camera from above and pointing straight down now occupies an entire side of the picture, but it is not important since the view of this side is captured in the next image, photographed with the rotator positioned on the opposite side: We'll carefully exclude the area of the rotator including its center and the entire lateral: The same we'll do with the next image.

It is identical to the previous one except for the camera has totated togheter with the rotator, which was moved from side to side. This way, both images are complementary: Once again, we'll create a mask to exclude from the panorama every visible part of the gear, this is both its center and lateral: We are ready to get back to the Images tab to start the stitching process.

The Control Points detectors are external programs aditional to Hugin. Out of those found at the drop-down menu only a few come installed with Hugin, while others need to be downloaded and installed independently. Not all of them are free. We'll use the default detector, Hugins CPFind freeware: By selecting the detector we can see the default amount of Control Points is ten points by overlap. The larger the number of Control Points, the greater the stitching presition and the slower working speed: We'll increase the number of Control Points up to a maximum of 50 points by overlap and click to start the stitching process: A new window pops up where we can see the program's internal processes as they are conducted: When they are done, an alert like this tells us the number of Control Points found: Hugin's main window has abeen refreshed with the new available information: This means that one of the images is not being recognized as a part of the entire panorama.

It also tells us that this is the image identified with the number 0 in the image's lists in Hugin tabs, so the key to solve this problem could be found there: Before focusing on this image, we'll try to give this problem a more general solution.

Back on the Images tab, once again we'll display the menu to choose another Control Points detector: We can keep the maximum of Control Points by overlap that we had defined earlier: With a click we'll start a new Control Points search powered by this external detector installed togheter with Hugin: Also during this search a new window will show us the internal processes of the detection.

We won't pay much attention to it: At the end of the process, a new alert tells us that in the later detection six new Control Points have been added to those previously detected. Will these be enough for the program to identify now all the images as belonging to the same panorama? Apparently the answer is yes. At Hugin's main window, togheter with the updated figure representing the created Control Points, we can see that now all images are inwardly connected.

We can also read that no aligning has been conducted using all of them: We'll then click on Align This is not important for us: F-Recovery for xD-Picture Card. F-Recovery MediaUndelete. Fab Fashion. FairStars Audio Converter. 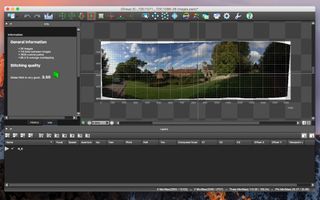